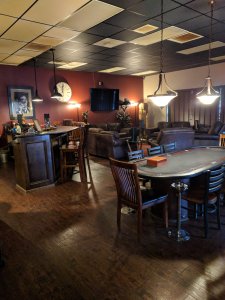 On a visit to Fayetteville, Arkansas, my wife and I dropped in at Open Door Cigars and Pipes, where we were warmly welcomed to this fabulous tobacco establishment, bar, and lounge. It reminds me of those great wood-paneled clubs of old. I picked up some G. L. Pease Haddo’s Delight and Cornell & Diehl Star of the East, both of which I enjoyed on first smoke. I also acquired an HIS black straight apple sandblast, which is now breaking in quite nicely. I’ll definitely be back.

The next stop on my Greater Austin Tobacco Tour was Habana House in North Austin. (There’s a second store in South Austin.) This is a beautiful place with a humungous walk-in humidor and lots of comfortable seating. To the immediate right of the entrance are enticing shelves with many bulk and tinned tobacco, including some of the greats from McClelland, Dunhill, Cornell & Diehl, GL Pease, BriarWorks (blended by C&D), and more. After smoking a cigar and wandering around, I bought an ounce of C&D Epiphany, which is a match for what Albert Einstein is said to have smoked: Revelation. I didn’t stay long enough to smoke a bowl of it, but I will when I get home in a few days. Habana House also has a small, but high-quality pipe selection, featuring, among others, beautiful Savinellis and Petersons.

The tobacconist on duty, a nice guy, was not a pipe man, so my chat was brief. I’ll have to return to the shop on my next visit to the city.

My next stop was The Cigar Vault in Buda, Texas, south of Austin. The year-old shop occupies an old bank building, and the cigar humidor is actually the bank’s vault. The bank was the scene of a legendary robbery many years ago.

We were greeted warmly by Brian Foley, who made us feel right at home. The shop has plenty of leather furniture, so it’s a comfy place for a smoke and conversation. While it has lots of cigars, it does not neglect us pipe smokers, and it’s only going to get better: Brian plans to stock more pipe tobacco in the near future. A small selection of pipes, including corncobs and the work of local pipe makers, was on display, along with some tobacco. One of the featured blends is Sutliff No. 5, which is said to be a match for the soon-to-be-extinct Dunhill My Mixture 965, a favorite of mind. I haven’t tried No. 5 yet, but will when I get home. Instead, I had a bowl of Prince Albert in my Missouri Meerschaum Charles Town Cobbler.

The Cigar Vault also has coffee, wine, and craft beers.

A couple of doors away is an antique shop, which had a few estate pipes. I picked up an unsmoked rustic hardwood pipe — maple wood, I would guess.

I will definitely visit The Cigar Vault again when I return to the Austin area.